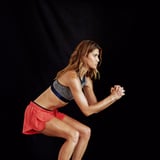 Memorial Day marks an important day in the CrossFit community, where CrossFit boxes (aka gyms) across the country do a Murph WOD (workout of the day) to honor Navy Lieutenant Michael Murphy, who was killed in the line of duty in 2005.

While on tour in Afghanistan, Lt. Murphy was leading a team of three fellow Navy SEALS on a mission, when goat herders discovered the team’s hiding spot. Instead of killing the herders, Murphy let them go. An hour after the herders were set free, more than 100 Taliban fighters opened fire on Murphy and his team; it is believed the herders disclosed the SEALS location. In an attempt save his team, Murphy walked into a clearing to make a satellite call for help and was shot, but not before signing off with a “thank you.” He later died of his wounds. He was 29.

After his death, Lt. Murphy was awarded the Congressional Medal of Honor. His favorite workout, originally named Body Armor, is now referred to as “Murph” in his honor. If you do this workout on Memorial Day at a CrossFit gym, you may find many of the athletes who serve in the military performing this workout in full uniform. From my experience, I can attest that it’s pretty emotional. Check out the workout below, and since it’s pretty intense, we’ve included two ways to modify this workout of the day (WOD).

We realize that for most people, this workout is incredibly challenging – impossible, even. Keep reading for two different versions that break up the running portion and/or the bodyweight exercises: pull-ups, push-ups, and air squats.

These two Murph variations still involve running two miles and doing the same amount of reps – 100 pull-ups, 200 push-ups, and 300 air squats – but they give your muscles a break, so the Murph may seem less daunting. The first variation below still took me 42 minutes to complete, and after three days, my arms and legs were still sore. This year, I’m looking forward to performing the workout the way Lt. Murphy preferred it, in his honor, and to honor all the men and women who have served our country.

Since this variation might seems a little confusing, let us break it down. After running a half mile, you complete five rounds of the bodyweight exercises. Then repeat the entire workout three more times, starting with the half mile run.

In this variation, you split up the bodyweight moves into 20 rounds with low reps, but one-mile runs still bookend the strength workout. Want to Get Bigger? Start With These 9 Gym Tactics. Kick Carbs to the Curb -These 11 Snacks From Amazon Are What Every Keto-Lover Needs!