As I write these words, it’s the Spring Equinox, that magical time of year when winter’s officially over and night and day are of equal length – approximately three foot seven.It’s also, the internet informs me, the night of a supermoon. Whether this means our satellite gains incredible powers and starts becoming desperate to protect its true identity from its girlfriend, I have no idea but I certainly won’t be getting into a fight with it any time soon, just to be on the safe side.But, of course, the moon isn’t the only thing in our lives that’s super.So is a certain kind of star.The kind of star who has three pages dedicated to him or her every week in the comics produced by Marvel UK exactly forty years ago, back when supermoons seemingly never happened. If they did, I don’t remember ever hearing about them. In fact, I don’t remember ever hearing about supermoons at all before the World Wide Web became a big thing.No wonder YouTube keeps recommending those videos to me that claim the moon doesn’t exist and is merely being projected onto the sky by NASA. 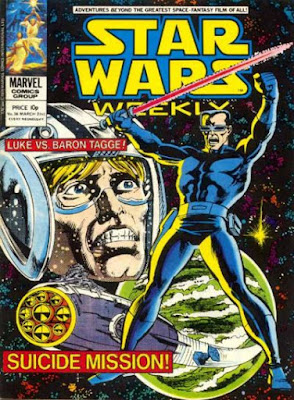 As so often, I don’t have a clue what happens in this issue but I do know that’s a very Wally Woodesque villain from Carmine Infantino.Admittedly, I’m only guessing that he’s a villain but, from his stance, that seems a fair guess to make.I’m wondering if this cover was created specially for Marvel UK, as I can find no trace of it on the front of the original US mags.Also, judging by last week’s cover, Marvel UK now seems to be printing Star Wars stories several months in advance of the US division.If so, I assume that that, technically, makes the US comics reprints of the British ones. 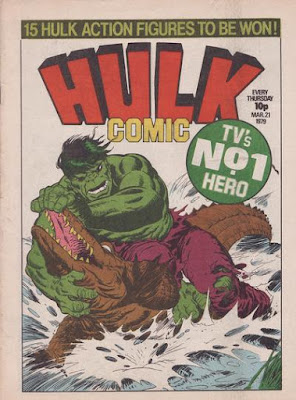 In order to rescue a girl from imminent death, the Hulk has to fight an alligator – and struggles horribly to beat it. In fact, it nearly kills him and he’s lucky to escape with his life.Yes, it’s the all-new British version of the Hulk, the rubbish one who owes far more to his TV portrayal than he does to his Marvel Comics incarnation.We also get Ant-Man trying to clear his lab of communists, the Black Knight and Captain Britain bumping into each other in a cave and coming to blows, more of the Real Hulk and the Beast in Canada and some Night-Raven action involving a protection racket.SHIELD are up to something too but I don’t know what. 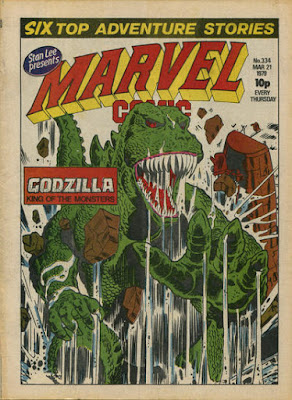 Gasp as Godzilla starts his American rampage.He’s turned up in Alaska and SHIELD are out to stop him.This is all I know of the contents of this issue. 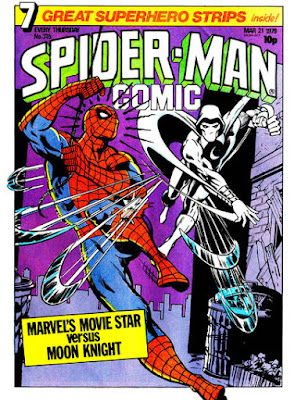 I know Spidey’s up against Moon Knight who’s the subject of a Maggia assassination attempt.That is all I know.I can’t help feeling this feature’s a bit rubbish this week.I hope it’s better next week. Even I’ll be sending emails of complaint if it’s not. 5 Monthly Expenses You Can Easily Negotiate Down